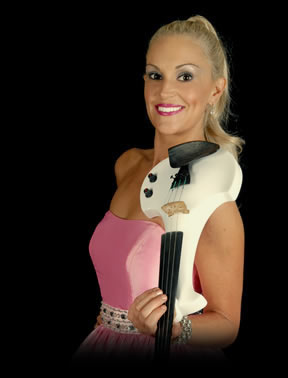 Suzie G, one of Australia’s top violinists has wowed audiences all over the globe… combining classical training, beauty, and musical flare.

Suzie G is the musical/artistic director of Maske Music. She holds a Post Graduate of Music from the Hong Kong Academy of Music, a Bachelor of Music and a Diploma of Music from the QLD Conservatorium. She also holds an A.MUS and L.MUS of Music majoring in Violin.

Suzie began performing at age 5 with the Suzuki school in Perth, Western Australia and has gone onto perform as a freelance musician with the QLD Orchestra, Hong Kong Philharmonic and the Melbourne Symphony.

In 2005, Suzie G founded the internationally acclaimed electric string trio ‘Maske’. Over the past 14 years Maske has travelled to every corner of the globe entertaining audiences with their high energy explosive show. Suzie G is the first violinist and music producer for the group. As well as being the headlining act they have performed with and supported some of the big names in the music industry including country singer Keith Urban, Britain’s Got Talent winner Paul Potts, Turkey’s number one pop star Emre Aydin, and the famous brothers Amaan and Ayaan Ali Khan from India.

In 2010, Suzie added another string to her bow moving into the Guest Headline Entertainer luxury cruise ship market. She has cruised with Holland America, Royal Caribbean, Princess, Celebrity and RSSC. Suzie regularly performs all around the world her full length concerts with a seven to ten live piece band. Click here to learn more about Suzie G’s show.